source: Amway Australia, Because October 2007
Diamond IBO Ingrid Peskops proves that you can achieve anything – no matter what your circumstances – with belief and a lot of heart. “It’s been a while,” Ingrid Peskops says as she squeezes her foot into a rigid riding boot that has stiffened with time. She struggles, but she finally gets her foot in. “Ever since I started this business I haven’t had much time on the farm,” she explains. Ingrid grabs the other boot and goes through the same motions. After some tugging, the boot is on and she is ready to ride her first cutting horse in years. She walks confidently through the Cooranbong farm she shares with her husband – not glancing twice at the scattered piles of cow dung – and enters an arena where a herd lazily roams. She mounts her horse and leads it towards the incognizant cows, then separates one from the rest. As the lone cow tries to rejoin the herd, Ingrid loosens her hold on the reins and the horse instinctively quashes the cow’s attempts to run past. The horse’s movements are quick; Ingrid is assertively pulled in different directions. The action goes on for a few minutes, then finally, Ingrid takes control of the reigns again and the cow is left to join the herd. This is called cutting – an equine riding sport that has its roots in the cattle ranches of the American west. Although Ingrid hasn’t done it in years, she rides like she never stopped. It is only when she gets off the horse and gasps, “that was scary”, that you realise what she was really feeling. But Ingrid isn’t one to let potentially scary things stop her. It didn’t stop her on her journey to the Diamond pin, when, as she admits, there were plenty of things that could have held her back. Firstly, she started building the Amway business by herself since her husband, Irwin Kent, was already running his own engineering business. And, that was only five years ago. Secondly, there was her age. She could have told herself that she was too old to start a new business. Then, there was the fact that she was a successful life coach; there weren’t many life coaches at the time who did well in the business. Instead of letting all of these things stop her, she recognised that this business opportunity would be taking her life to a new level of fulfilment.

All through her life, Ingrid has overcome adversities which have moulded her into the strong, confident, and courageous woman she is today. Her family escaped from their home country of Latvia during the war when she was only a little girl. She light heartedly says that “it was like the Sound of Music” as she describes how they had to leave. They moved to Bavaria for five years, but the cold war scared her parents into deciding to try for a new life elsewhere. So, along with their 10-year-old daughter Ingrid, they travelled on a boat to the other side of the world and ended up in Perth. Ingrid did not know how to speak a word of English before she came to Australia, but that didn’t stop her from eventually becoming an English teacher. Similarly, when she first signed up to start the business and was told to bring 20 prospects to a national conference, she just did it. It was only later that she realised that it was something not many people did. She was rewarded for her efforts with priority seating and the opportunity to meet her US based upline Crown Ambassadors, Jim and Nancy Dornan.

Nancy took one look at Ingrid and said to her, “You are my kind of woman.” 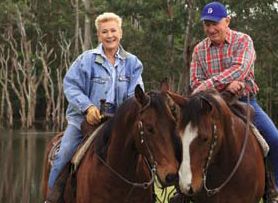 Ingrid went Platinum only 11 months after joining. The momentum continued as she rapidly went through the pins. Last year, she was the only IBO in Australia to qualify for the Emerald stretch and a $75,000 One Time Cash Award. After that achievement, it just seemed logical to work towards Diamond, which she accomplished in five short years after she first decided to build

the business. The support she has received from her upline Double Diamond Norman and Glenda Leonard, and Jim and Nancy Dornan has been invaluable.

Life just keeps getting better for the Sydney mother of three and proud grandmother of one very smart two-year-old boy. She and Irwin live in Sydney’s northern beaches, own two farms, and are in the process of building another house on one of their properties. She is grateful that she was able to relocate her parents from Perth to Sydney. She also credits Nutriway supplements for helping her father survive his illness longer than the doctors expected and she boasts that her mother is the healthiest person at the retirement village. As for Ingrid, all the Artistry products and Nutriway supplements have helped her to look and feel much younger than she did when she started the business. Overall, it’s a very different life to the one she started in Australia all those years ago.

Ingrid says, “We all have circumstances, but as (inspirational author) James Allen said, ‘Circumstances don’t make the man, they reveal the man.’ This business teaches you that circumstances are created and happen to you, but it has nothing to do with your future. If you want to, you can.” “Your own personality is perfect. Whoever you are, whatever background you come from – it doesn’t matter. It’s what’s inside you that counts. It’s what is in your heart.”